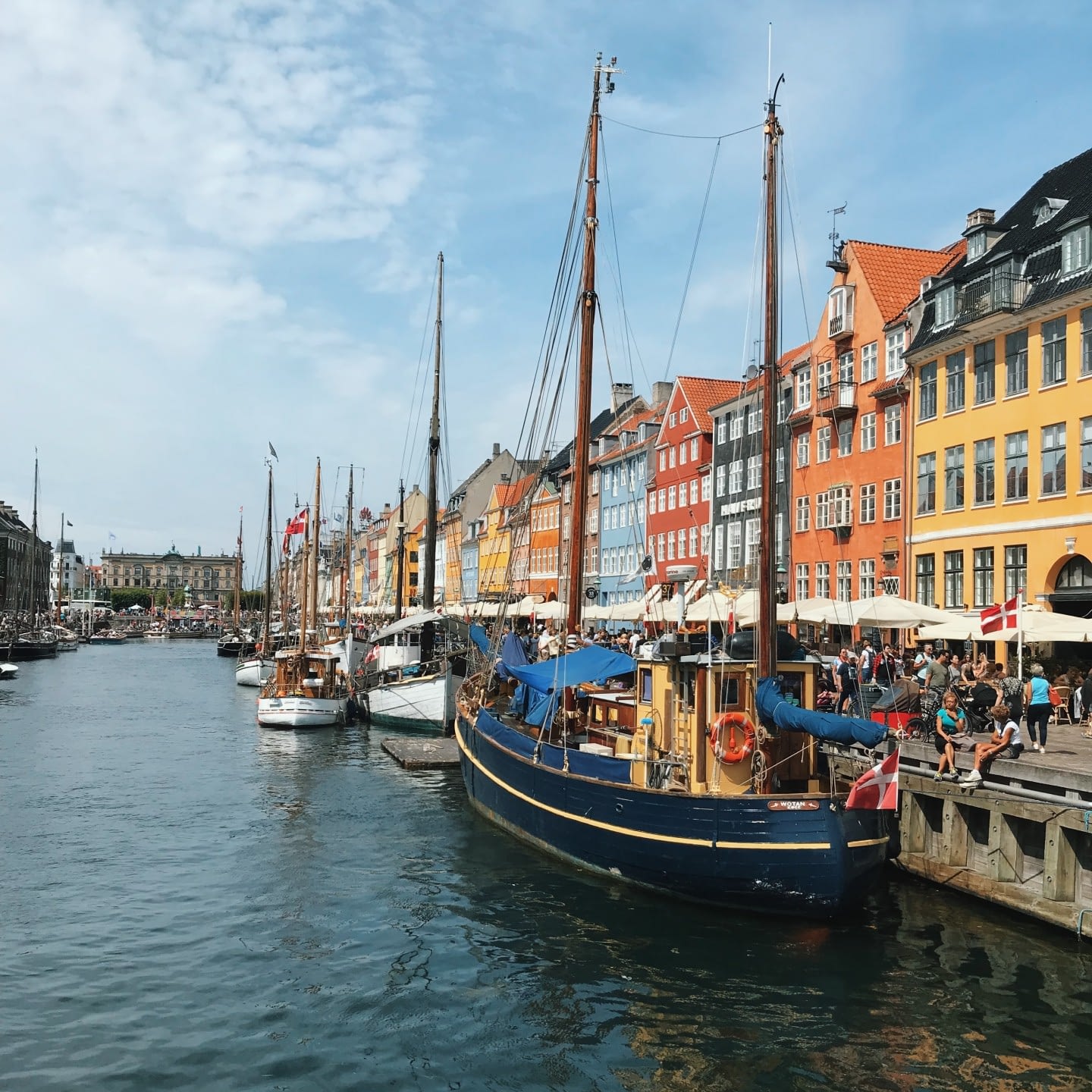 In September 2019, my boyfriend Andrew and I spent 3 days in Copenhagen, Denmark.

Months earlier, we planned to see one of his favorite bands in Boston. I had to cancel, so he went with a friend instead and had an amazing time. He insisted we find a way to see the show together, even if we had to travel. I looked up the tour dates and saw that the only ones left were in Europe. So I jokingly said, "Let's go to Copenhagen."

And that's how we ended up in Denmark for a long weekend.

Andrew and I got up around 6 am, which was horribly early for both of us. We drove from our place in Western Massachusetts to my parents' house near Boston. Then we headed to Logan Airport for our flight with Scandinavian Airlines.

Travel nerves and excitement always have a weird effect on my body. I'm not sure if it was the exorbitant airport prices or if I just wanted something quick, but I decided that Sbarro was the most appealing dinner option. That probably didn't help. I had a bit of a stomach ache and didn't feel great. But like always, that subsided after takeoff.

Knowing it would be morning when we landed, I tried to get some sleep but didn't get more than a few light hours. The flight wasn't very long and my sleep was interrupted several times by flight attendants serving meals. Not that I'm complaining. I love food (even airplane food sometimes).

After taking the bus to our Airbnb and dropping off our stuff, we visited the hippie commune of Christiania. It's a unique place that felt like a different world. It was cool to walk around, view the artwork, and just feel the vibes.

After that, we walked around without much of an agenda. We had a lot of time to kill before the Airbnb would be ready for us. We ended up going to the Church of Our Saviour, which had a spiral staircase leading to the top. As you approach the top, the stairs begin to wrap around the church on the outside. The views of the city were gorgeous. But, well...we didn't think about what it would mean to be almost 300 feet above the ground on a windy day. The narrow stairs were made even narrower by the amount of people shuffling past us. The railings were a bit too low for comfort, too. We were both kind of terrified, but we made it back alive.

After that little adventure, we showered and took a nap at the Airbnb. That did wonders for our post-flight grogginess. We ate at a random kebab place and then took the bus to the Tivoli area, where we got hot dogs from a cart called John's Hotdog Deli. Shoutout to them for having such incredible hot dogs! We may have returned a few too many times during our short trip.

Next, we went into Tivoli Gardens, which turned out to be the best decision ever. I had some idea of what it would be like, but it blew all my expectations out of the water. It was breathtaking. And since we were there at night, it was lit up with a million lights.

We were able to hop on some fun rides before they closed. Some of them looked terrifying, like the Himmelskibet (one of the world's tallest swing rides...no thanks). I wanted to ride more, but we had gotten there too late.

Not everything shut down, though. A Danish musician named Christopher played on a big stage. Neither of us knew who he was, but he seemed pretty famous. He had a lot of fans singing along and cheering in the audience.

We took some pictures around the park before heading back for the night, but not before Andrew bought another hot dog.

We started the day with a visit to a cafe for some smørrebrød (SMUHR-blruhd). We struggled a bit with the pronunciation, but our Airbnb hosts tried their best to teach us. It's a Danish open-faced sandwich made with dense rye bread and a variety of toppings. I went with potato. If you know me at all, that's not a surprise. Give me potatoes in any form and I'll eat 5 pounds in one sitting.

After breakfast, we rented some bikes and rode around the city. This was a big deal for me. Not because it's the classic thing to do in Copenhagen, but mainly because I've had a tumultuous relationship with bikes. Long story short, I gave up on them in high school after too many bad experiences. But at the ripe old age of 25, I hopped back on and rode through the streets of Copenhagen. It wasn't nearly as scary as I thought it would be thanks to their wide bike lanes. I did hit an old Danish man in the back of the leg, but luckily he was understanding.

After checking out some parks and gardens, we stopped at a place called GRØD, which means "porridge" in Danish. There, we had some oatmeal porridge with caramel sauce, apples, and nuts. We also got hot chocolates. This was my boyfriend's second trip to Copenhagen, and he knew this place was good. The food was delicious and the atmosphere was super cozy.

Next, we rode to Superkilen, an urban park full of interesting art that celebrates cultural diversity. It has tons of places to hang out, activities to do, and structures for kids to play on. The weather was wonderful and we felt at peace there, sitting on a hill and just enjoying the day.

We also visited the Copenhagen Botanical Garden, which was lovely. Next door, there was a Butterfly House. I have a fear of butterflies and anything that flutters, but I went in anyway and it wasn't too bad.

For dinner, as part of a birthday gift to me, Andrew took me to a restaurant called Kadeau. It has two Michelin stars and serves multi-course meals sourced from the Danish island of Bornholm. In all, we each had 17 courses, some with wine pairings. It was the fanciest meal I've ever had and I left with a full and satisfied stomach. Even though I'm not a seafood fan, I enjoyed every seafood dish they created.

It was a great day full of firsts and I was able to face two fears in one day!

Our last full day in Copenhagen was lovely. We returned our bikes and relaxed at a park before meeting up with a food tour group. We make a point to book a food tour in every city we visit and we always enjoy it. It's a nice way to learn about a place and socialize with other people. Plus, we're both obsessed with food.

During the tour, we tried some local honey, smørrebrød, rhubarb and elderflower juice, licorice, handmade hard candy, apple wine, beer, hot dogs, chocolate, and an assortment of crackers, cheese, and jam. It was all delicious (except for the licorice and insanely hoppy beer, but that's only because my baby tongue hasn't acquired the tastes).

After eating, we wanted to visit the Royal Library but it was closed. We wandered around until we came across the Design Museum and decided to check it out. It was inspiring. The most exciting part was when we unexpectedly came across a 3D model of a building that's located 10 minutes from our home in Massachusetts.

We ate more hot dogs for dinner, struggled to get train tickets, and returned to the Airbnb before heading back out for the Muse concert at the Royal Arena. It was a great show, but let me tell you...Danish people are tall. As an eternal emo kid, I've been to over a hundred concerts in my life and I've never had such a hard time seeing the stage.

After the concert, we stopped at 7-Eleven because I was craving a slush. It was about as good as I expected it to be (that is, not very good). Finally, we took a series of trains and buses back to the Airbnb.

The last day was a travel day. Saying goodbye to a place is never fun, especially when your visit is as short as this one. Andrew woke up feeling ill, which lasted all day. I did my best to help him feel better, but I'm sure all those buses and lines and the 7-hour plane ride weren't pleasant for him. We're still not sure what caused it because we ate the same things and I never got sick. The way I see it, feeling unwell for no clear reason is part of the travel experience. Luckily, Andrew felt better the next day and it was back to normal life.

Even though we only spent 3 days in Copenhagen, I loved it. As soon as I stepped outside, I knew I would.

Everything felt so open and clean, the total opposite of New York City (Nothing against NYC! I like different cities for different reasons). Despite my fear of bicycles, I enjoyed riding around the city quite a bit.

And I love their style. Stepping into a cafe felt like stepping into my bedroom. When I redid my room a few years ago, I had no idea there was an entire country with the exact same design tastes as me. I've also identified with hygge (HUE-guh) my whole life. I'd love to go back and stay longer next time. I could even picture myself living there at some point.